Dogs comfort the children of Newtown

A group of eight golden retrievers and their owners arrived in Newtown to comfort the relatives of the victims of shooting incident. “Dogs allow people to release their emotions” says dog behavioural therapist Inge Pauwels. “The power of therapy dogs is incredible.”

“Comfort dogs” that’s what American emergency workers call their golden retrievers. “They are our furry rescuers,” says their trainer Lynn Buhrke. “They help people relax. Some people start to laugh, others cry, but at least it helps them deal with the events. “

Recently the golden retrievers visited the victims of hurricane Sandy. In Newtown they walk around day and night in hospitals, in schools and on the street. “The dogs are the bridge. People sit down and start talking, “says Buhrke.

The initiative started at Northern Illinois University in 2008 after a gun man had killed five students there. The dogs were sent to distract the students. They proved so popular that they came back later. Today more than sixty dogs in six states can be sent to help with their unconditional love.

“What a fantastic idea,” says animal behaviour therapist Inge Pauwels. “The presence of animals – and especially dogs – has a beneficial effect. Research shows that your heart rate slows, your blood pressure drops and your breathing settles just by being around them. Animals do not judge or condemn, there is no embarrassment. That is why people can relax and allow emotions to show. Certainly children are more likely to tell their story to an animal. In America, practically every hospital and institution has its therapy animal. That can also be a cat or even a ferret. “

Inge Pauwels also trains comfort and therapy animals in Belgium. On request, she goes to schools or to institutions for dementia. “A therapy dog ??is also a blessing for children with autism. The world opens up for them, they often tell the animal unexpectedly clear stories. If they become angry the dog will simply  lie on or next to them until they become calm. “

A good therapy dog ??has a calm, stable character and is obedient. They are often golden retrievers. “They have their image and people love them but I often work with my American Stafford, Raico, “says Inge Pauwels”. A breed that, despite its bad public image, is very gentle and feels human emotions. “

Inge is already keeping the American example in mind. “Every day we see here what our animals can offer to people. Yes, the use should be even more accepted here, but we already recognize the added value of assistance dogs for people with disabilities. I think that in time we will also recognize the added emotional value. The power of therapy dogs is immense. “

Do you want to know more about an activity, education or service?

Become a member, sponsor us or become a godmother/father of one of our animals and support our projects!

Follow us on social media for up-to-date information and tips about therapy animals!

Get this e-book about therapy animals when you subscribe to our tips. 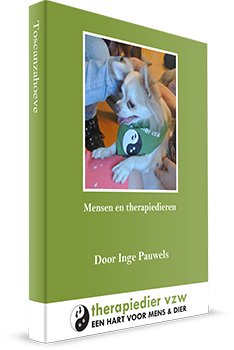 We keep your info temporarily and with respect for your privacy.